I am running into an issue with EF6, though I'm fairly sure that this applies to previous versions that support this type of mapping. I fear I know the answer to the question at hand, but I hope that I am doing something wrong, or there is a better workaround than what I present here. All classes are gutted for clarity.

which as you can see have a many to many relationship defined. I've defined two classes which derive from SoftwareFirmware, the aptly named

I'm using Table Per Hierarchy inheritance, so Software and Firmware are stored in the same table with a discriminator column. Finally, I've mapped the relationships in the derived DbContext's OnModelCreating method with

The problem at hand is that Entity Framework does not seem to support inheritance with this mapping, as I receive the following when EF tries to generate the database:

From this I gather that a type that inherits from SoftwareFirmware is not good enough for the NavigationProperty, it must be a SoftwareFirmware type. If I tear the DeviceType collection out of the SoftwareFirmware base class and duplicate it in each of the derived classes, things work, but that's certainly less than ideal.

So finally, my question is- is there another way to configure this so that I can keep my navigation property in my base class? If not, is there a cleaner workaround than what I've described?

UPDATE: so it would seem that SQL Server Management Studio did me wrong, as I had diagrammed out the database previously without the overloaded version of WithMany that takes an expression and it did not include the junction tables. It seems like SSMS doesn't play nice with schema changes in terms adding new diagramming even when the database has been dropped and recreated- it must be restarted. Major pain, but I digress...

As a last ditch effort, I reverted to the parameterless version of WithMany for the mappings, deleted and recreated the database by restarting the application, restarted SSMS, and lo! The junction tables were created. All I needed to do is add an Ignore for the base SoftwareFirmware class's DeviceTypes property and everything generated cleanly. So my FluentAPI mapping code looks like this:

which generates this schema- pretty much exactly the schema I wanted (ignore the extra properties): 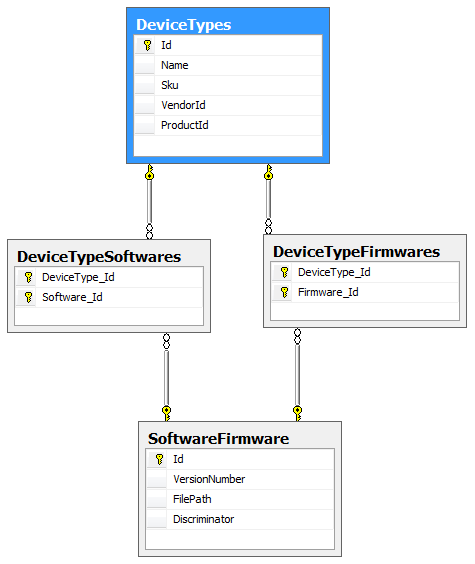 However, since the parameterless call to WithMany only hooks up a navigation property on one side, updates to Software.DeviceTypes and Firmware.DeviceTypes aren't tracked by EF so I'm back where I started.

What you're trying to model is a bit strange because you're kind of treating them as distinct relationships, but also not. There are two options here...

Remove SoftwareFirmware.DeviceTypes and add a DeviceTypes property on Firmware and Software.

This is actually what you are doing when you put Ignore on the SoftwareFirmware.DeviceTypes property and use the empty overload of WithMany - which is why it works. You're telling EF that there are two relationships (one Software -> DeviceType and the other Firmware -> DeviceType) and that there is no navigation property that points back the other way. Since you ignored SoftwareFirmware.DeviceTypes it's just not part of your model.

Option 2: It's one relationship

Remove the two navigation properties on DeviceType and replace them with a single navigation to the SoftwareFirmware base class. You can always add some faÃ§ade properties that filter the contents to Software and Firmware (as shown below)

This problem sounds familiar. (checking my email ...yep it was over a year ago!) I had someone send me a sample where a fluent api relationship was failing. They did not have a many to many but I think it's the same problem. I spent a long time looking at it and asked Rowan Miller (on the team) and he said that the fluent api can't comprehend the property coming from the base type.

i.e. the fluent API can't see the DEVICETYPE property when it's looking at AvailableSoftwareVerions or at AvailableFirmwareVersions. (I can't tell you WHY this is. You'd think it could find it via reflection but maybe it just wasn't designed with this scenario in mind.)

This still didn't make sense to me so he explained further (and I'll update his explanation with your types which was a little confusing since you have extra levels of inheritance and things are named a bit inconsistently ...but I

Conceptually the classes donâ€™t really make sense, because a DeviceType can have many Software(s) or Firmware(s)â€¦ but the inverse navigation property is defined on SoftwareFirmware. So what happens when something that isnâ€™t a Firmware or Software has a DeviceType? Itâ€™s inverse is configured as > DeviceType.AvailableSoftwareVersions but that canâ€™t work. Even taking EF out of the picture the correct way to model that is to have the Project property be on Report.

That was with EF5. If my memory is correct and it's the same problem, then maybe it hasn't changed for EF6. Perhaps we should look to see if there's an issue in there for solving this problem. However, his further explanation suggests that it's not a bug but a protection.

(I'm going to ping him to verify that I'm inferring the previous problem to this one correctly).

In that email, Rowan also suggested using getter logic instead of a navigation properties as a workaround.

How can I destroy a many-to-many relationship in Entity Framework without having to load all of the data?

You can Attach() a subscription then Remove() it - note, we're not using Add() here, just Attach, so effectively we're telling EF that we know the object is attached in the store, and asking it to behave as if that were true....var db = new TopicDBEntities(); var topic = db.Topics.FirstOrDefault(x => x.TopicId == 1); // Get the subscription you wa...
ado.net entity-framework many-to-many
asked by Steve Willcock

By convention, Code First will take uni-directional associations as one to many. Therefore you need to use fluent API to let Code First know that you want to have a many to many self referencing association:...protected override void OnModelCreating(ModelBuilder modelBuilder) { modelBuilder.Entity<Member>().HasMany(m => m.Friends).WithMany().Ma...
c# code-first entity-framework many-to-many
asked by Morteza Manavi

How do you go about creating new tags? And how do you attach the existing or created entity to the the article....Use something like ...Article a = new Article(...); a.tags.add(GetOrLoadTag("some tag")); ...Read this article ...http://thedatafarm.com/blog/data-access/inserting-many-to-many-relationships-in-ef-with-or-without-a-join-entity/
.net c# entity-framework exception primary-key
asked by Dasith Wijes

The relationship between the tables Role and Employee is represented as a navigation property - each ...Employees... property in the ...Role... entity will only contain the Employees that have this particular role....Putting it the other way round - every Employee's ...Roles... property only contains the roles that particular employee has. ...Given...
asp.net c# entity-framework linq
asked by BrokenGlass

I cant give you the exact code for your situation, but I can tell you your situation will be simplified ten fold by having a joiner table inbetween Employees and Company just to break up the many to many relationship.
change-tracking entity-framework many-to-many
asked by Isuru Fonseka

The problem is that you create more contexts....First you create the clubs. It's ok. But when you create the persons, you fetch the clubs via ...GetClubs..., but for each club you dispose the actual entity framework context so you end up with detached entities. At ...InsertPersons... you add detached club entities to the new persons so the actual c...
.net c# ef-code-first entity-framework
asked by Peter Porfy

EF doesn't know where ...User.Events... has to be mapped to. It could be ...Event.CreatedBy... or it could be ...Event.Users.... Both would result in a valid model. You must give EF a little hint what you want by applying the ...[InverseProperty]... attribute:...public class User { ... [InverseProperty("Users")] public virtual ICollecti...
code-first ef-code-first ef-migrations entity-framework
asked by Slauma

How to define Many-to-Many relationship through Fluent API Entity Framework?

The terms ...Left... and ...Right... in ...MapLeftKey... and ...MapRightKey... in the many-to-many mapping with Fluent API can be misunderstood and I guess your problem is caused by this misunderstanding....One might think that it means they describe the columns that are "left" and "right" in the many-to-many join table. That's actually the case if...
c# ef-fluent-api entity-framework many-to-many
asked by Slauma

When you are working disconnected it might be a solution to load your original entity in your business method (server side) and work with the navigation properties connected and save them later....for example the following code shows how to save a category with the child products in a disconnected scenario : ...protected void UpdateCategoryWithProd...
asp.net-web-api c# entity-framework entity-framework-6
asked by Mohammad Chamanpara