MVC 5: Should I inherit my User from IdentityUser class?

I was trying to learn Asp.Net Identity and in this tutorial,

Also, what are the advantages of inheritng dbcontext class from IdentityDbContext<TClass> over plain DbContext class as done in MVC 4

There are couple of interfaces designed for this 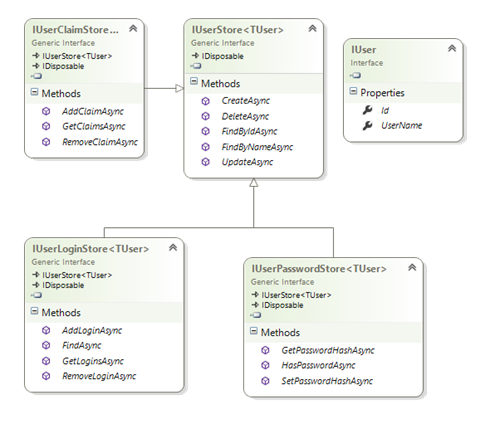 A user object must implement the IUser interface, which requires every user to have at least an ID and a name. The most notable aspect of IUser is the Id property of type string. Strings work well for GUIDs but can be a bit tricky when using integers for keys as is common with SQL Server. More details in a future post.

The I*Store interfaces in the Core Identity assembly are factored to offer various levels of functionality.

IUserStore defines the bare minimum functionality youâ€™d want for users â€“ create, retrieve, update, and delete (CRUD) functionality. If your website wants to allow users to create local accounts with passwords, youâ€™ll want a component implementing IUserPasswordStore (which is an IUserStore). For third party logins (Twitter and Facebook, for example), add in IUserLoginStore, and for claim storage there is an IUserClaimStore. Also, not shown in the class diagram above, is a collection of interfaces for roles (IRole, IUserRoleStore, etc). Let the debate on roles versus claims begin.

The UserManager is a concrete class and it is the UserManager that provides the domain logic for working with user information. The UserManager knows when to hash a password, when to validate a user, and how to manage claims.

There are a few extensibility points with the UserManager, for example, the manager has a number of properties you can use to set a custom user validator (any object implementing IIdentityValidator), a custom password validator, and a custom password hasher. The primary extensibility point is via the UserManager constructor, which allows you to pass in any object implementing IUserStore. If you want to use a UserManager to manage user information stored in SQL Server, weâ€™ll look at pre-built classes to do this in a later post, but it is also easy to create an IUserStore to work with a document database or other forms of storage.

Remember an IUserStore doesnâ€™t know how how to work with user passwords, only an IUserPasswordStore knows about passwords. The UserManager is aware of the different core interfaces and will try to work with the capabilities of the store object given in the constructor. For example, if you use FindByIdAsync the UserManager can use the user store to query for a user by ID, but if you invoke FindAsync (which takes a username and a password), and the underlying store doesnâ€™t implement the IUserPassword store interface, the UserManager will be forced to throw an exception.

Itâ€™s tricky to use a single concrete class for everything from users to passwords to claims, and tradeoffs must be made. Weâ€™ll also look at some of the tradeoffs in upcoming posts.

Now ASP.Net identity supports generic IdentityUser<TKey> before it was a string,i.e UserId was a string

The IdentityDbContext<> class is a class that inherits from DbContext as you would usually do but provides ready DbSets for Roles and Users.

Yes, your user dto should inherit from IdentityUser and any additional fields you want in your database associated with your user can be added to that class.

This makes it much easier to add additional fields to your database that are associated with your user and if you are using Entity Framework migrations and database initializes it means that you can now generate the entire Identity database from your DbContext.

Inherit a common base class in EF code first

I'm converting my EF POCO project to Code first. I had changed the T4 template, so that all my entities use a base class, ...EntityBase..., that provides them with some common functionality that is not persistence related....If I use ...[NotMapped]... attribute on ...EntityBase..., all entities inherit this attribute and I get a ...The type 'X.X.Pe...
ef4-code-only ef-code-first entity-framework
asked by Alireza

I am trying to customize IdentityUser class in asp.net identity....public class ApplicationUser : IdentityUser { public ApplicationUser() { IsBlocked = false; } public bool IsBlocked { get; set; } } ...The problem is: when using code first migrations, the additional field is created nullable. The same if I drop database and...
asp.net-identity ef-code-first entity-framework entity-framework-6
asked by aleyush

I'm developing a Web Api 2.2 application with .NET Framework 4.5.1 and Asp.Net Identity 2.1.0....I'm not sure what I'm doing, but I want to merge my database with ASP.NET Identity database and I have done this:...My own ...dbContext.......public class EFDbContext : IdentityDbContext, IUnitOfWork ...My own ...User... class....public class User : ...
asp.net asp.net-identity c# entity-framework
asked by VansFannel

how to create a new user when inheriting from IdentityUser

I have the following class derived from IdentityUser. Person class is stored in AspNetUsers table in the database, and everything looks good on the database-side....public class Person : IdentityUser { [Required] [StringLength(50, ErrorMessage = "First name cannot be longer than 50 characters.")] public string FirstName { get; set; } ...
asp.net-identity c# entity-framework entity-framework-6 linq
asked by renakre

If you are not using the UserId in the view, just set it before you add:... if (ModelState.IsValid) { expense.UserId = HttpContext.Current.User.Identity.Name; // or whatever db.Expenses.Add(expense); db.SaveChanges(); return RedirectToAction("Index"); } ...Another common pattern is to add a hidden field f...
asp.net-mvc-5 c# entity-framework-6
asked by Steve Greene

I'm using Entity Framework Code First with inheritance to define my classes each implementing an abstract class containing common properties all of them should have....I ran into a problem when I wanted to add new one to batch. All inherited classes have property having a common name with different type, but in this last class, property had same ty...
c# entity-framework entity-framework-6 inheritance
asked by Bogac

Is it possible to use POCOs and EF to work with the following situation? I would like to have a Vehicles table, with some bool fields such as IsFast, IsVan, IsTruck, and then have a Vehicles class, with a FastVehicle, Van, Truck class that inherit from Vehicles class, without having their own tables, and without having a discriminator field? ...S...
c# entity-framework entity-framework-6
asked by user868386

Insight into inheriting from a base controller class

Try the following code. I would suspect your static methods are linked the to BaseController. ...static methods are basically a method to fallback from object oriented concepts. As a consequence, they are not very flexible in inheritance hierarchies and it's not possible to do such a thing directly....response = GameSystemManager.ListGames(Base...
asp.net-core asp.net-core-mvc entity-framework-6 razor
asked by eVolve