Database is not getting created at first time

How can the database be rebuilt using EF6?

I tried the two posts below, but I don't know why it's not working or why I keep receiving the same issue.

My sample is already available on the web server. I'm using the DBMS Sql Server Express 2012.

My program was functioning properly when I constructed it and published it on a web server. The database was automatically built. I then made some modifications toApplicationDBContext and included a few propertiesIdentityModes(ApplicationUser) . Then, I migrated the database on my IIS Express locally, and everything was running smoothly. Then I attempted to publish my sample on the web server once more, but this time an error was displayed.

I tried again after deleting the database on the web server. but I'm still having the same problem. There is currently no table in the empty database.

Database on user registration is being created by the application.

Additionally, I read this and attempted to contact post.dbContext.Database.Initialize(true); and ((IObjectContextAdapter)myContext).ObjectContext.CreateDatabase() way, yet it is still ineffective.

By the way, Chris Pratt is right.

I downloaded a project that required me to just execute "Update-Database."

The quick screenshots are shown below. 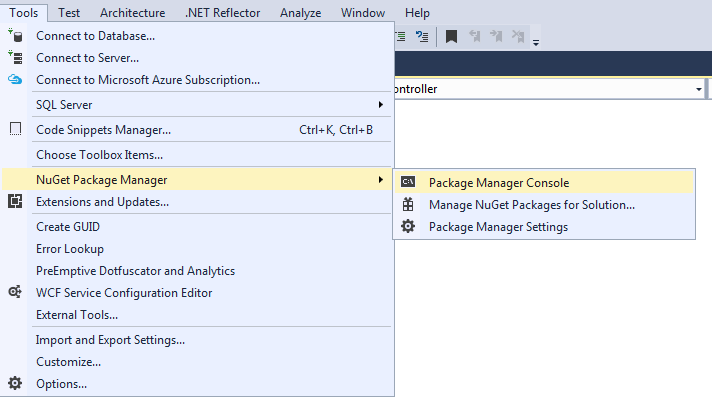 then, in Visual Studio's bottom corner

code first entity framework 4.1 The permission to CREATE DATABASE was refused in the database'master.'

I recently encountered this issue. Your DbContext subclass's class name must precisely correspond to the connection string's name. If it doesn't, EF won't be able to locate the connection string and will attempt to fall back to an other method (SQL embedded? ), which is ineffective on my computer (I have full SQL Server installed).
entity-framework
asked by jlew

I've had this issue before and found a solution. Using SQL authentication rather than Windows' is crucial. The best approach to set the default database is in this manner....Try the following connection string:...<add name="MFCConnectionString" connectionString="Data Source=.\SQLEXPRESS;AttachDbFilename=|DataDirectory|\MFC.mdf;Initial Catalog=MFC;I...
c# ef-code-first entity-framework sql-server-2008
asked by cheny

Create one to one relationship by using entity framework database first

How to create Multiple one-to-one relationships in EF Code first?

The first table lacked a primary key........Although the edmx indicated a...Composite Primary Key... Strangely, it took updating the source database and refreshing the edmx for the table to be successfully created in the designer from the edmx Model....To the underlying table, add a PK (original mapped to edmx)...Update the edmx model....Now ...dbC...
c# ef-code-first entity-framework-6
asked by Niels Filter

I created and updated the database initially using code. My package manager update-database commands were effective up until yesterday. But now it is broken and has the following error: In the database "master," the CREATE DATABASE permission is refused. I don't alter the connection string or any other configuration. So I attempt to update the data...
asp.net-mvc-4 c# code-first entity-framework-6 sql-server
asked by masoud noursaid