How Do You "Really" Serialize Circular Referencing Objects With Newtonsoft.Json?

I'm having a problem getting some data serialized correctly from my ASP.NET Web API controller using Newtonsoft.Json.

Here's what I think is going on - please correct me if I'm wrong. Under certain circumstances (specifically when there aren't any circular references in the data) everything works just like you'd expect - a list of populated objects gets serialized and returned. If I introduce data that causes a circular reference in the model (described below, and even with PreserveReferencesHandling.Objects set) only the elements of the list leading up to the first object with a circular reference get serialized in a way that the client can "work with". The "elements leading up to" can be any of the elements in the data if it's ordered differently before sending things to the serializer, but at least one will be serialized in a way the client can "work with". The empty objects end up being serialized as Newtonsoft references ({$ref:X}).

For example, if I have an EF model complete with navigation properties that looks like this: 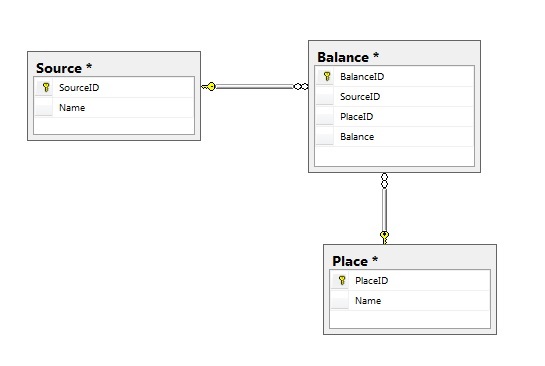 Here's the fundamental query I'm doing using Entity Framework (lazy-loading is off so there aren't any proxy classes here):

So far so good, data is populated.

If there are no circular references, life is grand. However, as soon as there are 2 Balance entities with the same Source or Place, then the serialization turns the later Balance objects of the top-most list that I'm returning into Newtonsoft references instead of their full-fledged objects because they were already serialized in the Balances property of the Source or Place object(s):

The problem with this is that the client doesn't know what to do with {$ref:4} even though we humans understand what's going on. In my case, this means that I cannot use AngularJS to ng-repeat over my entire list of Balances with this JSON, because they aren't all true Balance objects with a Balance property to bind. I'm sure there are tons of other use-cases that would have the same problem.

to all of the navigation properties to break the circular references? Because THAT doesn't seem right either.

Yes, using PreserveReferencesHandling.Objects is really the best way to serialize an object graph with circular references, because it produces the most compact JSON and it actually preserves the reference structure of the object graph. That is, when you deserialize the JSON back to objects (using a library that understands the $id and $ref notation), each reference to a particular object will point to the same instance of that object, rather than having multiple instances with the same data.

In your case the problem is that your client side parser does not understand the $id and $ref notation produced by Json.Net, so the references are not being resolved. This can be fixed by using a javascript method to reconstruct the object references after deserializing the JSON. See here and here for examples.

Another possibility which might work, depending on your situation, is to set ReferenceLoopHandling to Ignore when serializing instead of setting PreserveReferencesHandling to Objects. This is not a perfect solution though. See this question for a detailed explanation of the differences between using ReferenceLoopHandling.Ignore and PreserveReferencesHandling.Objects.

It sounds like you are having the same general problem as the original DataContract serializer, in regards to cyclic references. While objects referencing each other is fairly common with object graphs in memory, such cyclic references inevitably result in infinite recursions when serialized if the serializer does not specifically account for it. T...
asp.net-mvc entity-framework javascript json.net
asked by jrista

When serializing an object of type 'SubSonic.Schema.DatabaseColumn,' a circular reference was discovered.

How did I resolve the circular reference problem in Json serialization?

If you turn off proxy creation you also turn off lazy loading. When serialization of entity occures it visits all navigation properties. If lazy loading is enabled it loads all related objects and tries to serialize them as well. Again it visits all their properties including navigation properties pointing back to parent object. At this point you h...
entity-framework json serialization
asked by Ladislav Mrnka

You could try to remove the ...virtual... keyword from all navigation properties to disable lazy loading and proxy creation and then use eager loading instead to load the required object graph explicitely:...public ActionResult GetAll() { return Json(ppEFContext.Orders .Include(o => o.Patient) ...
asp.net-mvc-3 c# entity-framework json serialization
asked by Slauma

My solution was to simply remove the parent reference on my child entities....So in my model, I selected the relationship and changed the Parent reference to be Internal rather than Public....May not be an ideal solution for all, but worked for me.
asp.net c# entity-framework json.net
asked by Anthony Main

Your POCO entities are perfectly serializable. Your problem is that the dynamic proxies the EF runtime creates for you are usually not. You can set the ...context.Configuration.ProxyCreationEnabled... to ...false... but then you lose lazy loading. My strong recommendation to you is to use ...Json.NET... which supports serialization for EF entities:...
asp.net-mvc-4 c# entity-framework json serialization
asked by Radu Popovici - Oncica

Its because it is trying to load child objects and it may be creating some circular loop that will never ending( a=>b, b=>c, c=>d, d=>a) ...you can turn it off only for that particular moment as following.So dbcontext will not load customers child objects unless Include method is called on your object... db.Configuration.ProxyCreationEnabled = fal...
.net asp.net-mvc-4 c# entity-framework json
asked by kuma DK

I'm trying to access the property fields (JSON) from the child entity that is received from Web API. By looking at the browser console, however, it is showing a reference instead of the fields. How do I get access to these fields?...ANGULAR JS VIEW... <table infinite-scroll='tF.loadMore()' infinite-scroll-disabled='tF.isBusy' infinite-scroll-distan...
asp.net-web-api2 entity-framework-6 json.net
asked by Erkan Demir