For a assignment of MySQL/SQL, I need to create 2 different tables to show the difference between strong entities and weak entities.

Could someone show me an example of how I would do this?

But I am unsure how to create a table showing the differences.

Imagine the Employee table with the following columns :

Now , each Manager is a Employee , thus if at all there is a Manager in the Manager table , there would be the same entry in Employee table.

The "is a" relationship is maintained : Each manager is a Employee but each Employee is not a Manager 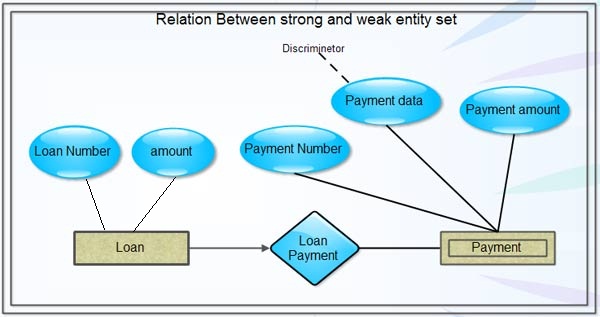 Let us consider another scenario, where we want to store the information of employees and their dependents. The every employee may have zero to n number of dependents. Every dependent has an id number and name.

Now let us consider the following data base:

There are three employees having E# as 1, 2, and 3 respectively.

Employee having E# 1, has two dependents as 1, Rahat and 2, Chahat.

Employee having E# 2, has no dependents.

Now, in case of Dependent entity id cannot act as primary key because it is not unique.

Thus, Dependent is a weak entity set having id as a discriminator. It has a total participation with the relationship "has" because no dependent can exist without the employees (the company is concerned with employees).

There are two tables need to created above e-r diagram. These are Employee having E# as single column which acts as primary key. The other table will be of Dependent having E#, id and name columns where primary key is the combination of (E# and id).

What's the difference between Entity Framework, LINQ to SQL, and ADO.NET with stored procedures?

Stored procedures:...(+)...Great flexibility...Full control over SQL...The highest performance available...(-)...Requires knowledge of SQL...Stored procedures are out of source control...Substantial amount of "repeating yourself" while specifying the same table and field names. The high chance of breaking the application after renaming a DB entity ...
ado.net entity-framework linq-to-entities linq-to-sql sql
asked by user151323

Linq to Entities vs. Linq to SQL vs. Entity Framework

I read a lot of articles about how to work with a database in WPF .Net 4 application. As I understood, the main two technologies are:...Linq to SQL (L2S)...Entity Framework (EF)...but sometimes I also can see mention of Linq to Entities (L2E) technology, but can't find clear explanation what difference between EF and L2E....So, my question is: Does...
ado.net entity-framework linq-to-entities linq-to-sql
asked by Mike B.

How is it going to work for ORM? Should I still write SQL scripts to upgrade the DB?...Clear answer of this question should be on Programmer's stackexchange thread - ...What are the criteria for evaluating an ORM for.NET?..., there i got simple answer for your question that you asked and matches with my experience with ORM while developing some p...
devexpress entity-framework nhibernate upgrade xpo
asked by Niranjan Singh

Linq To Entities - Any VS First VS Exists

Any translates into "Exists" at the database level. First translates into Select Top 1 ... Between these, Exists will out perform First because the actual object doesn't need to be fetched, only a Boolean result value. ...At least you didn't ask about .Where(x => x.Count() > 0) which requires the entire match set to be evaluated and iterated over b...
any ef-code-first entity-framework exists
asked by Jim Wooley

What are the differences between following-...CreateQuery() Â ExecuteFunction(), ExecuteStoreQuery() and ExecuteStoreCommand() ...As per my knowledge CreateQuery is used for Entity SQL & rest of the methods are used for sql function or stored procedure defined in DB....As per ObjectContext class meta data they are as follow:...CreateQuery():Create...
c# difference entity-framework executestorequery
asked by paul sim

This statement is incorrect:...On server side, when we use Async methods, we also need to add await....You do not need to add "await", ...await... is merely a convenient keyword in C# that enables you to write more lines of code after the call, and those other lines will only get executed after the Save operation completes. But as you pointed out,...
async-await c# entity-framework
asked by Rajeev Goel

I am trying to generate my model classes from a mysql database schema, with EF6. I use the ado.net wizard database first approach and I get an exception that says :...Unexpected exception occured when generating the model. StrongTypingException:the value for column 'IsPrimaryKey' in table TableDetails is DBNull.
entity-framework entity-framework-6 mysql strong-typing
asked by Theodora Tzalla

So there's a few posts around complaining about the performance of the MySQL plugin for Entity Framework 6. Most of these, however, seem to come down to it generating bad SQL. I'm suffering with this issue but it seems to be due to a performance lag due to the plugin itself....Here's my query in LINQ:...List<Address> matches = _rep.GetAddresses(s =...
c# entity-framework entity-framework-6 linq mysql
asked by Bob Tway

MySql from VS 2017 Unable to create Entity Models from database

In SQL Server, Entity Framework 6 vs. Dapper vs. stored procedures vs. requests

I have EF with LINQ with SQL Server in my project a long time....And I was searching for a way to improve a performance of my requests to DB. And I read a lot of about Dapper and Procedures, that it's faster than EF. I added Dapper to project, I added procedure.... but my tests showed strange results. EF and Dapper and stored procedures have almost...
dapper database entity-framework linq sql-server
asked by olegl19