EF Code first migrations not running after deploy to Azure

I have two folders for my migrations (AuthContext and UserProfileContext), each has their own migration and some custom sql to run afterwards for data migrations and whatnot.

This works fine when using package manager console. I

Then everything is very happy in the new database, migrations executed data shuffled where it needs to.

I tried to test out the migrations on publish piece by:

Okay it published fine; however, when I went to look at the database, nothing happened! It did not create the necessary tables, columns, or data moves.

TLDR; Code first migrations are not running after publish to Azure

Update 1 I've tried any combination of the below: only one single connection string so I'm guessing that's not the issue, and execute migrations is checked. 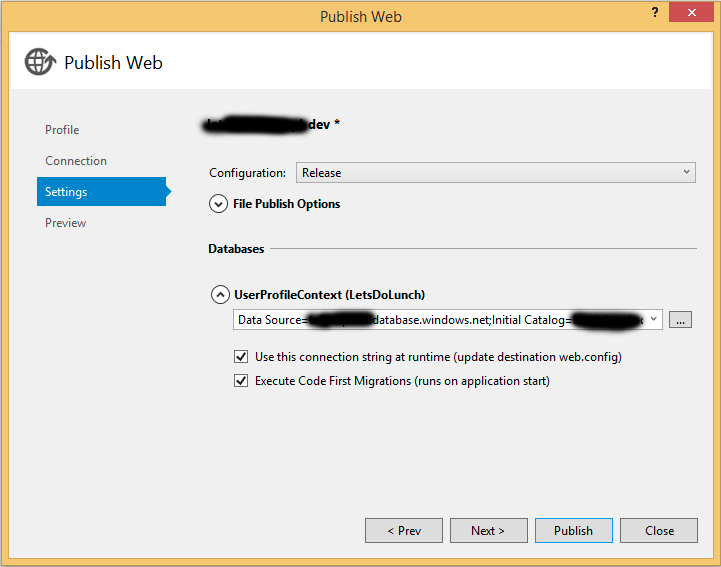 On publish the api runs but no database changes are made. I thought perhaps I needed to hit it first but I just get random errors when I try to use the api (which now of course relies on the new database setup), and the database is still not changed.

I've seen a couple references out there about needing to add something to my Startup class but I'm not sure how to proceed.

Update 2 I solved one issue by added "Persist Security Info=True" to my connection string. Now it actually connects to the database and calls my API; however, no migrations are running. I attached debugger to Azure dev environment and stepped through... on my first database call it steps into the Configuration class for the Migration in question, then barfs and I can't track down the error.

Okay, dug down and the first time it hits the database we're erroring. Yes this makes sense since the model has changed, but I have migrations in place, enabled, and checked! Again, it works fine when running "Update-Database" from package manager console, but not when using Execute Code First Migrations during publish to Azure

The model backing the 'AuthContext' context has changed since the database was created. Consider using Code First Migrations to update the database (http://go.microsoft.com/fwlink/?LinkId=238269).

Update 4 Okay I found the root issue here. VS is setting up the additional web.config attrib for databaseInitializer on only one of my database contexts, the one not mentioned is in fact hit first from my app.

So now I have to figure out how to get it to include multiple contexts, or, combine all of my stuff into a single context.

Solved! To summarize the solution for posterity:

Then I was hitting other errors and identified that if you're changing the base connection string to the model backing asp identity you need to include (one time publish) the additional flag base("AuthContext" , throwIfV1Schema: false)

The answer to this post is not very detailed.

This article explains what I had to do to fix a similar problem to this: https://blogs.msdn.microsoft.com/webdev/2014/04/08/ef-code-first-migrations-deployment-to-an-azure-cloud-service/

I'll roughly describe the steps I had to take below:

Step 1 Add your connection strings to your dbContexts, in my situation, they were both the same. 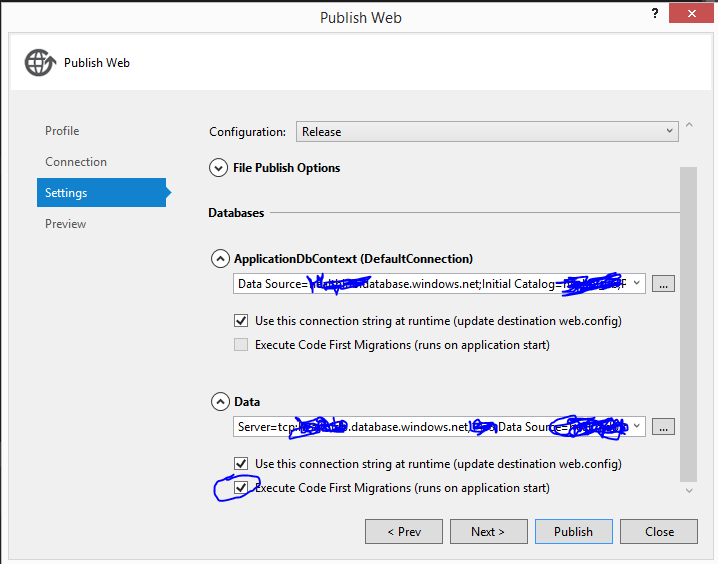 Step 2 Add this to your web.config

Step 3 And add this to the bottom of your global.asax.cs / Startup.cs(OWIN startup)

I'm using EF 6 alpha 3 code first. When I try to create the database on SQL Azure running the Update-Database command I get the following error:...Tables without a clustered index are not supported in this version of SQL Server. Please create a clustered index and try again....I tracked down the error to the __MigrationHistory table creation sql co...
azure-sql-database entity-framework entity-framework-6
asked by Bruno MoscÃ£o

Just remove the "create database" step and use the migrations on their own. I put a sample project on ...GitHub..., but the important bit is...Configuration config = new Configuration(); DbMigrator migrator = new DbMigrator(config); foreach (string s in migrator.GetPendingMigrations()) { migrator.Update(s); }
c# ef-migrations entity-framework
asked by mike mckechnie

This question is already marked as answered but while I was looking for information for my own deployment on Azure, I found this blog extremely helpful. Then I'd like to share because it concisely covers all the possible scenarios for your deployments using Code First Migrations. ...http://blogs.msdn.com/b/webdev/archive/2014/04/09/ef-code-first-mi...
asp.net-mvc azure ef-migrations entity-framework
asked by MarceloRB

I am using EF 6 (code first with migrations) for MVC 5 project. On my local DEV machine everything works fine....But when I deploy my project to Azure, I get the following error when my app first tries to interact with the database:...Migrations is enabled for context 'UtilitiesContext' but the database does not exist or contains no mapped tables. ...
asp.net-mvc asp.net-mvc-5 azure entity-framework entity-framework-6
asked by Moon

EF Code-First One-to-one relationship: Multiplicity is not valid in Role * in relationship

How do you run a code first entity framework migration without changing anything in the datamodel which would cause a migration to be created? I just want to run the seed method again because I added things to it.
ef-code-first entity-framework
asked by Jhayes2118

In my ASP.NET MVC Web App backed by EF Code First using EF Migrations, I need better control of DB Updates, making them semi-automatic. The goal is to run them from code only (e.g. by running ...DbMigrator.Update()...) but if not run, the application should still execute, ignoring possible alterations....To accomplish this, I'm setting ...DbMigrati...
ef-migrations entity-framework entity-framework-6
asked by thmshd