Why is it a bad idea to have a table without a primary key?

I am very new to data modeling, and according to Microsoft's Entity Framework, tables without primary keys are not allowed and apparently a bad idea. I am trying to figure out why this is a bad idea, and how to fix my model so that I do not have this hole.

I have 4 tables in my current model: User, City, HelloCity, and RateCity. It is modeled as shown in the picture. The idea is that many users can visit many cities, and a user can only rate a city once, but they can greet a city many times. For this reason, I did not have a PK in HelloCity table. 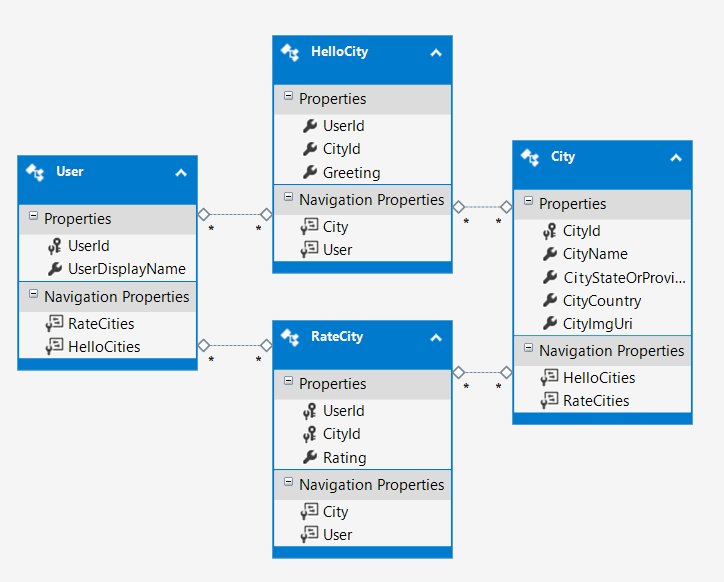 This response is mainly opinion/experience-based, so I'll list a few reasons that come to mind. Note that this is not exhaustive.

Here're some reasons why you should use primary keys (PKs):

In my opinion, not having a PK might be legal (i.e. the RDBMS will let you), but it's not moral (i.e. you shouldn't do it). I think you'd need to have extraordinarily good/powerful reasons to argue for not using a PK in your DB tables (and I'd still find them debatable), but based on your current level of experience (i.e. you say you're "new to data modeling"), I'd say it's not yet enough to attempt justifying a lack of PKs.

There're more reasons, but I hope this gives you enough to work through it.

As far as your M:M relations go, you need to create a new table, called an associative table, and a composite PK in it, that PK being a combination of the 2 PKs of the other 2 tables.

A primary key essentially tags a row with a unique identifier. This can be composed of one or more columns in a row but most commonly just uses one. Part of what makes this useful is when you have additional tables (such as the one in your scenario) you can refer to this value in other tables. Since it's unique, I can look at a column with that unique ID in another table (say HelloCity) and instantly know where to look in the User table to get more information about the person that column refers to.

For example, HelloCity only stores the IDs for the User and City. Why? Because it'd be silly to re-record ALL the data about the City and ALL the data about the User in another table when you already have it stored elsewhere. The beauty of it is, say the user needs to update their DisplayName for some reason. To do so, you just need to change it in User. Now, any row that refers to the user instantly returns the new DisplayName; otherwise you would have to find every record using the old DisplayName and update it accordingly, which in larger databases could take a considerable amount of time.

Note that the primary key is only unique in that specific table though - you could theoretically see the same primary key value in your City and User tables (this is especially common if you're using simple integers as IDs) but your database will know the difference based on the relationship you build between tables as well as your JOIN statements in your queries.

Another way primary keys help is they automatically have an index generated on their column(s). This increases performance in queries where your WHERE clause searches on the primary key column value. And, since you'll likely be referring to that primary key in other tables, it makes that lookup faster as well.

In your data model I see some columns that already have 'Id' in them. Without knowing your dataset I would hope those already have all-unique values so it should be fine to place a PK on those. If you get errors doing that there are likely duplicates.

Back to your question about HelloCity - Entity Framework is a little finicky when it comes to keys. If you really want to play it safe you can auto-generate a unique ID for every entry and call it good. This makes sense because it's a many-to-many relationship, meaning that any combination can appear any number of times, so in theory there's no reliable way to distinguish between unique entries. In the event you want to drop a single entry in the future, how would you know what row to refer to? You could make the argument that you search on all the fields and the greeting may be different, but if there are multiple visits to a city with the same greeting, you may accidentally drop all of those records instead of just one.

However, if it was a one-to-one relationship you could get away with making the combination of both CityId and UserId the primary key since that combination should always be unique (because you should never see multiple rows making that same combination).

The error means exactly what it says....Even if you could work around this, trust me, you don't want to. The number of confusing bugs that could be introduced is staggering and scary, not to mention the fact that your performance will likely go down the tubes....Don't work around this. Fix your data model....EDIT:... I've seen that a number of pe...
.net entity-framework
asked by Dave Markle

Can we have table without primary key in entity framework?

No you can't because Entity Framework needs to know the key to keep track on the object when you make an update or delete operation....Anyway it's not a good idea to have a table without a PrimaryKey
c# entity-framework
asked by Wahid Bitar

You can just include foreign key properties in addition to the navigation properties and then set them using the ids you have. If you do this will not have to go to the database to get related entities for just a sake of setting the relationship.
entity-framework entity-framework-6 insert
asked by Pawel

For me, the problem was Unique Index on some of the columns in my database. Violating the index was causing this error to be displayed....But when I was searching for the solution I found there can be other reasons for this error also , like make sure key have values and are not null , check concurrence setting for the column .
asp.net-mvc asp.net-mvc-4 c# entity-framework linq
asked by Danish Shaikh

Weak entities or join tables will not be generated by EF, you need to configure the relationships manually thru fluent API or using data annotations...As stated on Microsoft's website: under Relationship's convention:...Note: If you have multiple relationships between the same types (for example, suppose you define the ...Person... and ...Book...
.net c# entity-framework entity-framework-6
asked by Monah