Entity Framework v6 is what I'm using, along with SQL Server 2016 Express and Visual Studio 2015. I've already built a database using aSqlConnection and SqlCommand and stuff the SQL into a string.

I'm now learning EF6 on Guide to Entity Framework. I basically copy and paste my code into the extremely straightforward code-first example, but the SSMS database that was created is still not visible. I get no errors from my code either.

I took a screenshot instead of putting the code in. I'm hoping someone can let me know where the instruction or I'm going wrong. 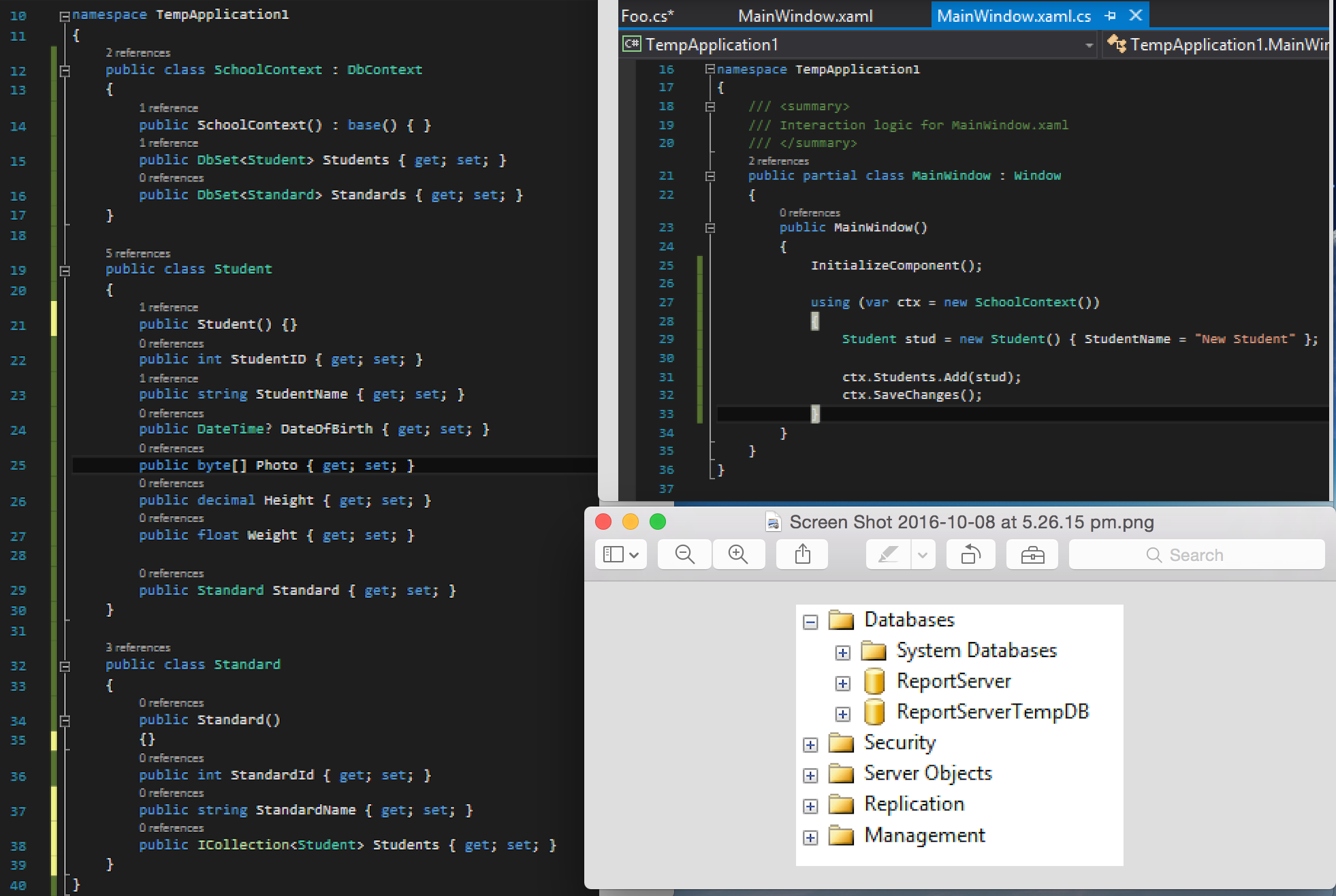 ï¼»EDIT] As a result of Sampath's advice, I get the following error: zzz -32-zzz

I run the same code on a different computer with the same configuration, and it runs successfully. Therefore, I think there may be some registry issues or SQL Server corruption. I remove ALL previous versions of SQL Server and all associated tools, manually delete any directories and files, then completely reinstall SQL Server Express 2016 and all supporting software. My code then operates.

I don't think this is a solution, but if someone has any ideas as to what could have caused this issue, I'd be willing to attempt to reproduce it or offer a true fix.

code first entity framework 4.1 The permission to CREATE DATABASE was refused in the database'master.'

I recently encountered this issue. Your DbContext subclass's class name must precisely correspond to the connection string's name. If it doesn't, EF won't be able to locate the connection string and will attempt to fall back to an other method (SQL embedded? ), which is ineffective on my computer (I have full SQL Server installed).
entity-framework
asked by jlew

I've had this issue before and found a solution. Using SQL authentication rather than Windows' is crucial. The best approach to set the default database is in this manner....Try the following connection string:...<add name="MFCConnectionString" connectionString="Data Source=.\SQLEXPRESS;AttachDbFilename=|DataDirectory|\MFC.mdf;Initial Catalog=MFC;I...
c# ef-code-first entity-framework sql-server-2008
asked by cheny

Create one to one relationship by using entity framework database first

In a project, the "Code First From Database" approach described in this article was applied with an existing database and EF 6.1....Model classes were initially created by EF; later, other classes were added to the database, and I now need to create model classes for these additional tables....Please advise on how I may avoid having to regenerate e...
.net c# ef-code-first entity-framework entity-framework-6
asked by user576510

Migrate database-first to code-first - switch from publish to migrations

I would begin with PROD, which is likely your lowest baseline. Create the migration labeled "Initial" or whatever you like and attach it to your project. Update-database and Up() should both be commented out. Attach the TEST database, which is the second most recent. Rerun the database update (Initial). Add another migration called "TestChanges." U...
ef-code-first ef-database-first ef-migrations entity-framework entity-framework-6
asked by Steve Greene

The first table lacked a primary key........Although the edmx indicated a...Composite Primary Key... Strangely, it took updating the source database and refreshing the edmx for the table to be successfully created in the designer from the edmx Model....To the underlying table, add a PK (original mapped to edmx)...Update the edmx model....Now ...dbC...
c# ef-code-first entity-framework-6
asked by Niels Filter

I created and updated the database initially using code. My package manager update-database commands were effective up until yesterday. But now it is broken and has the following error: In the database "master," the CREATE DATABASE permission is refused. I don't alter the connection string or any other configuration. So I attempt to update the data...
asp.net-mvc-4 c# code-first entity-framework-6 sql-server
asked by masoud noursaid

.... and ...(local)... use the installed ...default... instance, which will be shown in SQL Server Configuration Manager as the instance without a particular instance name....MSSQLSERVER... Any version of SQL Server may be used for this, including Express, Web, Standard, Enterprise, Developer, etc....(localdb)... refers to a SQL Server ...Simple L...
asp.net-web-api entity-framework-6
asked by marc_s