InvalidOperationException is thrown by EF4 Code-First.

I'm having an issue when trying to run my project each time it builds. It seems the initializer runs, but when it comes to the first query - it dies with the following InvalidOperationException.

What I want to happen is to re-create the database if there are any model amendments and seed it with a few values for the lookup table. Both of these things seem to be supported* out of the box.

When it runs, it dies on a line similar to this, which is basically the first query it comes across after creating the database.

Things I don't think it is:

Ideally, I'd like to "not think about the database schema" much. I'd like it to be as it seemed to be in Scott Gu's excellent blog post (and follow up for working with existing databases) where things just worked out and disappeared away. For the most part this is true. It seems to be an issue with the connection not being closed at some point, but I can't find out how to rectify this issue.

A few forum / SO posts do imply the issue I'm having is basically because the initializers aren't working exactly as planned and the connection might be left open. The solution in other places appears to be to simply "don't create your own initializer", which isn't the greatest solution - but unless anyone has any ideas, I'll probably have to do until CTP5 maybe.

I know that it is to late for answer, but this post is high on Goolge and answer may be useful for someone. The problem is missing credentials. To prevent this you need to change your connection string to have:

Based on this article

As requested I am posting my comment as an answer.

My solution was very similar to bizon where the Trusted_Connection and Persist Security Info needed correction but I accomplished it through visual studio properties by going to:

Server Explorer -> Modify Connection -> Advanced -> Then check both Persist Security Info and TrustServerCertificate as True, and it formatted the connection string correctly 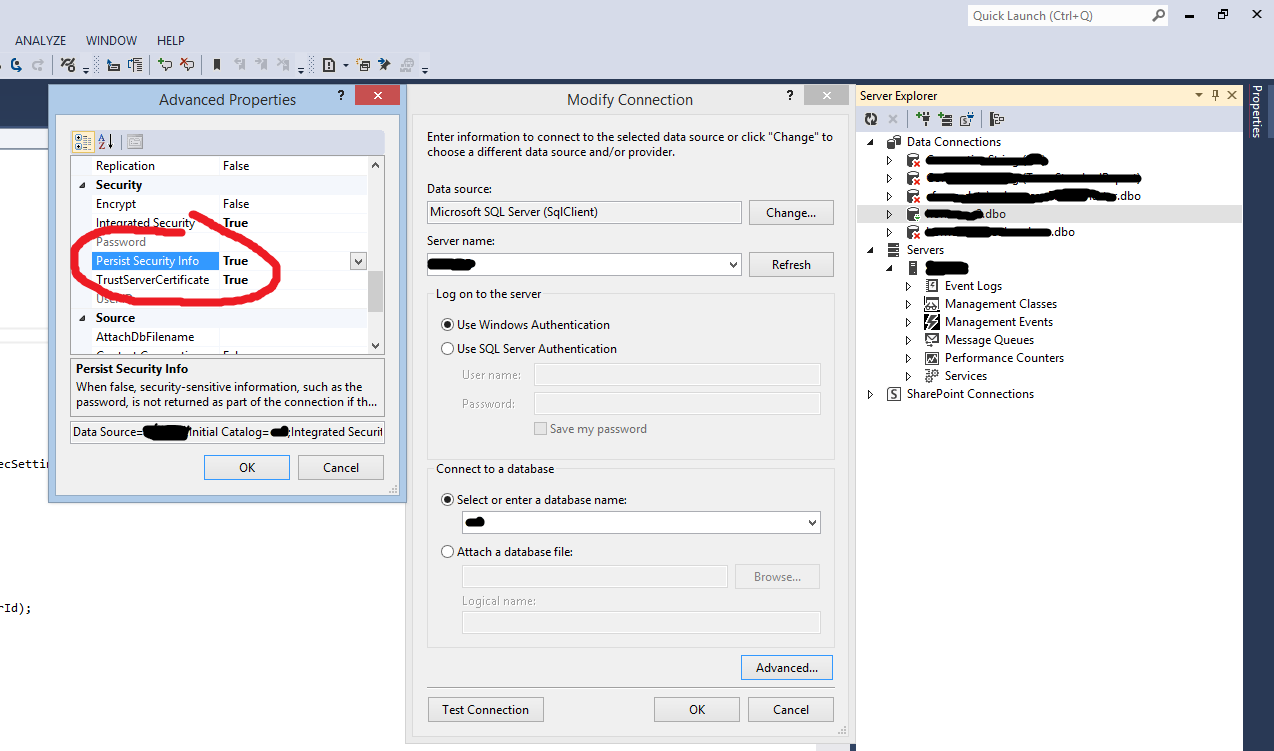 SQL Server does not support multiple cascade deletes, so you need to make one of your associations ...optional... in order to derive a SQL Server schema from your object model:...protected override void OnModelCreating(ModelBuilder modelBuilder) { modelBuilder.Entity<Diner>() .HasRequired(diner => diner.NameLocalization) .WithMa...
code-first entity entity-framework fluent-interface
asked by Morteza Manavi

First, in EF4.1, create a stored procedure with an output parameter.

I use Entity Framework 4.1 Code First. I want to call a stored procedure that has an output parameter and retrieve the value of that output parameter in addition to the strongly typed result set. Its a search function with a signature like this...public IEnumerable<MyType> Search(int maxRows, out int totalRows, string searchTerm) { ... } ...I found...
ef-code-first entity-framework parameters stored-procedures
asked by Sebastian Weber

You can modify all decimal propreties in database. In your DBContext in method OnModelCreating add line:...modelBuilder.Properties<decimal>().Configure(c => c.HasPrecision(18, 3));
ef-code-first entity-framework sql-types
asked by Robert

One more option is just delete the auto generated classes from the project and once again generate them. While following this approach only thing we need to make sure that is, we should give the same name for the data model(class name which inherits from DbContext ) as the previous one.Data model name is highlighted in below snap.
.net c# ef-code-first entity-framework entity-framework-6
asked by Rajesh Pawde

EF Code-First One-to-one relationship: Multiplicity is not valid in Role * in relationship

I'm using EF6 code-first, and have a ...User... class that needs to have incoming and outgoing connections to other users. A connection also has properties, so I also have a ...Connections... class....public class User { public int ID { get; set; } // Other properties removed here to keep it simple [InverseProperty("SourceUser")] ...
c# ef-code-first entity-framework entity-framework-6
asked by Dan

Solutions with one EF6 model (db first) and one code first

Migrate database-first to code-first - switch from publish to migrations

We need to migrate an existing project from database-first to code-first. Each environment (DEV, TEST, PROD) has a slightly different version of the database. The differences are the changes in DEV that may not have been pushed to TEST and PROD....--...We are using Entity Framework 6.1.3. ...We have a ...database project... that deploys the data...
ef-code-first ef-database-first ef-migrations entity-framework entity-framework-6
asked by Don Chambers

I'm a little stuck with EF Code-first to create a new database. We have an existing database and used the Model-First approach successfully. Now I would like to existing model to create a new database at run-time like this:...public class DatabaseInitializer : IDatabaseInitializer<MDREntities> { public void InitializeDatabase(MDREntities db...
c# ef-code-first entity-framework-6
asked by Niels Filter