I'm using Visual Studio 2015 to develop an ASP.NET MVC application on a Windows 7, 64-bit machine and I want to connect to an IBM DB2 9.7 database using Entity Framework 6 (Code-First).

I've found a number of articles online that indicate that the IBM Data Server Driver package and the IBM Visual Studio Add-In are required in order to use DB2 with Entity Framework 6 (although most of the articles appear to be referencing DB2 version 10.5). I have installed the IBM Data Server Driver package 32-bit and 64-bit versions, and the IBM Visual Studio Add-In (only 32-bit appears to be available), but a DB2 provider does not appear when I attempt to create the ADO.NET Entity Framework Code-First connection. 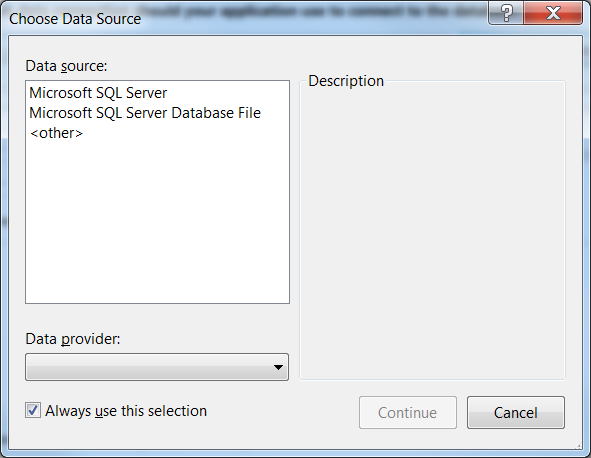 I installed the following files in the order listed:

Then, I extracted the zip file for the 32-bit and 64-bit versions of the IBM Data Server Driver for ODBC and CLI to the IBM folder in the C:\Program Files\ and C:\Program Files (x86)\ directories. I opened an elevated command prompt, navigated to the bin folder inside the extracted clidriver folders, and ran the following command:

Finally, I installed the IBM Visual Studio Add-In. After installing it, I opened a new MVC project in Visual Studio 2015 and installed the Entity Framework 6 provider for DB2 using Nuget. Then I right-clicked on Models and clicked Add | New Item | Data | ADO.NET Entity Data Model | Add. In the subsequent window, I clicked on Code First from database. In the next window, I clicked New Connection. This is where I arrived at the screen shot I provided above.

For reference, I tried a number of different permutations of the above steps without any luck.

We use IBM i Access Client Solutions to get the .Net DB2 provider.

Unfortunately, this is not freely downloadable.

Connectivity to DB2 for i using ODBC, .Net, and OLE DB

How to use Entity Framework Power Tools in Visual Studio 2015?

Now that VS 2015 is released, you will want to use EntityFramework Reverse POCO Generator ...https://visualstudiogallery.msdn.microsoft.com/ee4fcff9-0c4c-4179-afd9-7a2fb90f5838.... ALthough the instructions are a little involved, the tweaks/workarounds mentioned above are no longer needed, and it works great.
entity-framework visual-studio-2015 vs-2015-preview
asked by ckapilla

In my case I just: ... 1. Closed VS. ... 2. Removed Entity Framework package in packages folder manually. ... 3. Opened project and restored packages. ... That worked for me.
.net c# entity-framework-6 migration visual-studio-2015
asked by Alexander Kin

EntityFramework 6.1.3 does not support framework .NETPlatform,Version=v5.4 on visual studio 2015

I'm trying to access DB2 V10 over z/OS via visual studio 2015 and entity framework 6....After some research i found some promising article - ...http://www.ibm.com/developerworks/data/library/techarticle/dm-0903linqentity/...However the example used is for 2010 and the same Add-in is not getting installed for 2015. ...Is there any better way of doin...
add-in db2 entity-framework-6 visual-studio-2015
asked by Ramu

After updating Visual studio 2015, I am getting the following error when visual studio starts. Nuget Operation failed NuGet.Config is not a valid XML. ...Path...'.' hexadecimal value 0x00, is an invalid character. Line 1, Position 1....Also, i cannot use the package manager console anymore....I tried uninstalling and reinstalling it, but with no s...
entity-framework-6 nuget-package visual-studio
asked by Sal

Why isn't Edit and Continue working in Visual Studio 2015?

I am unable to get "Edit and continue" to work in Visual Studio. It fails with the message "Changes are not allowed if the project wasn't built when debugging started"....I am debugging an ASP.Net Core (1.1.0) Web API app using .NET Framework 4.6.1 and Entity Framework 6.1.3....I am using Visual Studio 2015 Enterprise Update 3 with IIS Express....I...
asp.net-core entity-framework-6 visual-studio-2015
asked by d ei