Cannot create an instance of because Type.ContainsGenericParameters is true 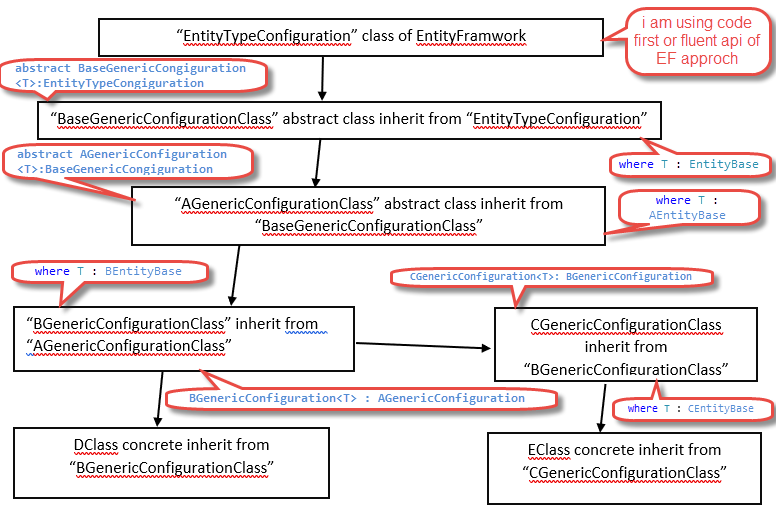 I am creating an instance dynamically using reflection.

and my exception is following :- "Cannot create an instance of CGenericConfigurationClass`1[T] because Type.ContainsGenericParameters is true."

To do this, you could do something like the following, but based on your example, I don't think this will be very useful since you need to create numerous configuration instances and you may not know what generic type to pass in.

Because string is not a delegate type, Entity Framework cannot convert lambda expressions to it.

I am using Entity Framework in my C# based code. I am running into an unexpected weirdness and am looking for suggestions....Case 1, 2, 3, 4... Projects:... RivWorks.dll... RivWorks.Service.dll... RivWorks.Alpha.dll ...Samples (all of these work):...RivWorks.Alpha.dll:...public static bool EndNegotitation(long ProductID) { var product = (from...
.net c# entity-framework lambda
asked by Keith Barrows

Unable to create a constant value of type 'Anonymous type'. Only primitive types or enumeration types are supported in this context

EntityFramework Unable to create a constant value of type 'Anonymous type'. Only primitive types or enumeration types are supported in this context

I'm trying to do a ...ToDictionary()... on my entities but I keep getting this error or another one similar like this one but with my entities shown in the message:...Unable to create a constant value of type 'Anonymous type'. Only primitive types or enumeration types are supported in this context....Or this one with my entity in the error msg:..
c# entity-framework linq
asked by Yustme

Expression of type 'System.Linq.Expressions.Expression cannot be used for parameter of type

OK. I found answer at my question. It is problem with generation method witch we will call....Expression.Call( null, ((MethodInfo)MethodBase.GetCurrentMethod()).MakeGenericMethod(typeof(TSource), typeof(TResult)), new[] { source.Expression, Expression.Quote(selector) }) ...For work, we need using ... Expres...
c# entity-framework-6 expression linq
asked by Hryhorii

The instance of entity type 'BookLoan' cannot be tracked

Your context already includes the entity, so rather that creating a new one, get the existing one based on the ID of the entity and update its properties, then save it...if (ModelState.IsValid && isBookCheckedOut(1) == true) { // Get the existing entity BookLoan bookLoan = db.BookLoans.Where(x => x.BookLoanID == model.BookLoanID).FirstOrDef...
asp.net-core asp.net-mvc c# entity entity-framework
asked by user3559349

Your DB Context is being shared by multiple requests, meaning that the entity you're editing has been tracked already....This is likely because your repository service is a Singleton rather than Scoped, and so your DB Context is being reused with the entity being tracked when it's pulled out, and then put back in to the same instance of the DB Cont...
.net .net-core asp.net-core-2.0 entity-framework
asked by Rudi Visser

Property type of 'System.Data.Entity.Spatial.DbGeography' which cannot be mapped to a primitive type

We finally figured out what our problem was. I'll post hoping it may help someone else. We were using Entity Data Source with a few of our controls and this is no longer supported with EF 6. ...Here's the corresponding stack overflow Q/A that helped us: ...EntityDataSource and Entity Framework 6
c# entity-framework-6 spatial-data visual-studio-2015
asked by Brian