Why adding a model Entity Framework to csproj fail?

Here is my project file csproj

In VisualStudio 2017 I try to add item "ADO.NET Entity Data Model". When push the Add button VS throw me an exception... 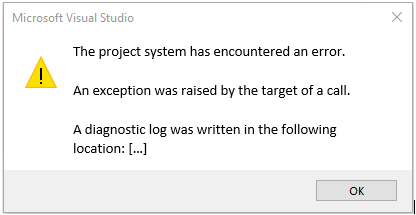 This issue describes the same exception as your log contains:

System.Reflection.TargetInvocationException: Exception has been thrown by the target of an invocation. ---> Microsoft.VisualStudio.ProjectSystem.ProjectException: The item type 'EntityDeploy' is not supported by this project item provider.

Unfortunatelly it does not have a direct solution.

Overall you shouldn't expect smooth functioning of EF tools with new csproj format. There is a discussion in EntityFramework6 repository which collects some of the known issues, both for migrations and EF tools. There is an explicit statement of EF team that we shouldn't expect near fixes for these problems:

On the flips side, working with EF6 in an ASP.NET Core application is possible but requires workarounds. E.g. in this case, keep the model in a separate .NET Framework library with a traditional project file, and unload any projects from the solution that use the new project system while working with migrations.

We are reluctant to commit to making EF6 migrations fully work with the new project system because we believe that would involve a significant investment which would hinder our progress on our main strategy, but perhaps there are less expensive things we can do to reduce the friction of the workarounds, e.g. make it so that you still need to put the EF6 model in a separate project but at least you don't need to unload other projects.

Regarding your problem I could suggest the following:

Well, such suggestions might not suit the perfectionists, but (again) new csproj format is not yet fully adopted by all existing VS tools and it's unknown for this moment when it happen.

I wrote a method to allow for an Expression to be passed in for the orderby clause, but I ran into this problem....Unable to cast the type 'System.DateTime' to type 'System.IComparable'. LINQ to Entities only supports casting Entity Data Model primitive types....Basically the expression is this:...Expression<Func<K, IComparable>> orderBy ..
entity-framework primitive-types
asked by Programmin Tool

How do I add a view to an Entity Framework model?

Check out ...this tip..., it might help...Alex
entity-framework
asked by Alex James

Why is my Entity Framework Code First proxy collection null, and I can't seem to get it to work?

I am using DBContext and have two classes whose properties are all virtual. I can see in the debugger that I am getting a proxy object when I query the context. However, a collection property is still null when I try to add to it. I thought that the proxy would ensure that collection is initialized....Because my Poco object can be used outside of i...
collections entity-framework poco proxies
asked by Rob Kent

You can reset the entity framework to solve your problem [...But keep it mind it will bring the Migration to the default state...]...Note: To take a backup before performing the following...You need to delete the present state:...Delete the migrations folder in your project...Delete the __MigrationHistory table in your database (may be under system...
entity-framework
asked by Swapneel Kondgule

Why don't you update your edmx from the development database server? If that's not an option, you can create an intermediary between development and production to hold your new stored proc. For example, you could create a new database project based on the schema of your production database, add your new stored proc, then deploy the database project...
c# entity-framework entity-framework-6
asked by Jonathan Amend

I am new to Entity Framework. I started with database first approach which created my classes corresponding to the tables I selected. I am using ...MVC.... One of my tables has a ...Date... column in it. My requirement is I want to display the Day in my ...gridview...(Grid MVC) i.e. if Date for that particular record fetched is 10/27/2015, then Da...
asp.net-mvc c# entity-framework entity-framework-6
asked by anu

Why does Entity Framework ignore TransactionScope (not adding with NOLOCK)?

Why is Entity Framework so slow to add multiple items in one SaveChanges()?

This is a follow-up from ...a previous question..., in which I was trying to figure out the main cause for my code running slowly. I think I've narrowed it down to a minimal example below. I have a basic database structure as follows:...public class Foo { public int Id { get; set; } public string Bar { get; set; } } public class FooContext...
c# entity-framework entity-framework-6
asked by Andrew Williamson