Why the text of combobox show the items with property name?

I'm working on a WPF project. Items from my database are automatically inserted into a ComboBox that I have. I'm attempting to get the ID of the item that is now chosen in the combo box. The items are displaying, but the property name is also shown in the combo box's text. I used the code to populate the combo box. 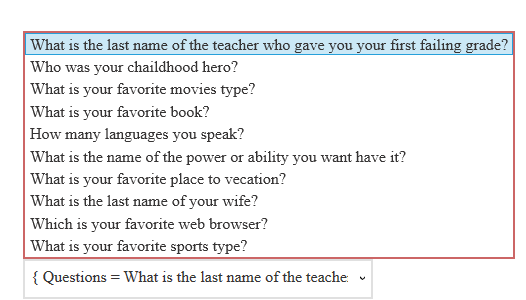 How can I structure the question that appears in the combo box such that just the content of the question, without the preceding brace, is displayed?

"Questions = What is the name of (text of chosen question)..." is written in the text.

What is the name of (text of chosen question) should be the only thing that appears in the text.

Update your code by trying to:

It's important to keep in mind that the other two options in this case fetch the data using SQL, then rearrange the items in memory, which is quite inefficient in terms of speed during both the query and the post-processing. Without the additional in-memory phase, this method completes everything in one step using SQL alone....The second method bel...
asp.net asp.net-mvc entity-framework linq sql-order-by
asked by Chris Moschini

How to add items to Combobox from Entity Framework?

Find all items whose collection property contains items in another list

Entity Framework .net: "The Name value should be a valid navigation property name."

How to select item with specific item in iCollection property?

When you call...ToList()... 2 times. You run the query expression and load the results to the lps variable when you use ToList in the second line of your code. In the next line, you apply the filter to the data that is in memory....You may omit the initial...ToList()... call that merges the filtering code to a single line and performs the query phr...
c# entity-framework entity-framework-6
asked by Shyju

Get ID of item selected in ComboBox

Why is Entity Framework so slow to add multiple items in one SaveChanges()?

Why EF can't sort items by the order of another collection and how to workaround?