Microsoft Azure Tech support has confirmed that all version of .Net 4.XX including 4.7.2 is supported in SQL Server Managed Instance CLR.

We're transforming some portion of Business layer with 4.7.2 and latest EF 6.2

Therefore in order to leverage existing investment in well tested code we want to move certain business layer into DB.

However we ran into problems, when publishing.

You are registering is not fully tested in the SQL Server hosted environment and is not supported. In the future, if you upgrade or service this assembly or the .NET Framework, your CLR integration routine may stop working. Please refer SQL Server Books Online for more details.

EDIT: Have given UNSAFE permission to all assemblies I'm referring to: Here are all the dependencies: 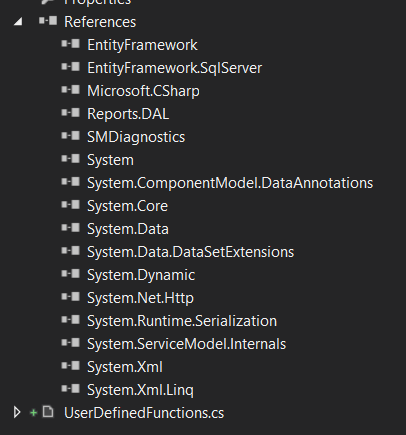 which prevents me to create Entity Framework UNSAFE assemblies into DB. Can we get past system.Runtime.Serialization?

Warning: The Microsoft .NET Framework assembly 'system.runtime.serialization, version=4.0.0.0, culture=neutral, publickeytoken=b77a5c561934e089.' you are registering is not fully tested in the SQL Server hosted environment and is not supported. In the future, if you upgrade or service this assembly or the .NET Framework, your CLR integration routine may stop working. Please refer SQL Server Books Online for more details. Msg 6218, Level 16, State 2, Line 11 CREATE ASSEMBLY for assembly 'System.Runtime.Serialization' failed because assembly 'System.Runtime.Serialization' failed verification. Check if the referenced assemblies are up-to-date and trusted (for external_access or unsafe) to execute in the database. CLR Verifier error messages if any will follow this message [ : System.AppContextDefaultValues::PopulateDefaultValues][mdToken=0x6000001] [offset 0x00000000] Code size is zero.

Microsoft Azure Tech support has confirmed that all version of .Net 4.XX including 4.7.2 is supported in SQL Server Managed Instance CLR

Furthermore Managed Instance does not allow UNSAFE CLR assemblies, as these would enable you to run arbitrary code and access server resources directly.

Even if you could get all these .NET Framework assemblies loaded into your database, it would not be a supportable solution in Managed Instance. As the support statement above makes clear, you must keep the copies of the .NET framework assemblies loaded in your database in sync with the .NET framework version on the server. The .NET Framework on the server is updated in Windows updates. When you are managing the server keeping your assemblies in-sync with the version in Windows is hard enough. But when Microsoft is patching the server, you have no way to know that you need to update your assemblies.

When running on an Azure VM you will be able to install all of the assemblies that EF requires. The only restriction in a VM is that you can't load mixed-mode assemblies, but I don't think EF (currently) relies on any of those. If you go to production with a solution involving .NET Framework assemblies loaded into your database, you should probably implement a startup stored procedure or scheduled task that refreshes your database assemblies from the Windows .NET Framework folder every time SQL Server starts.

Anyway here's a powershell script I was able to get EF6 and its dependencies loaded into a SQL Server database. But remember, just because you can load an assembly, doesn't mean it's going to work correctly. You'll have to test extensively to determine if your EF code will actually work.

But running your .NET code on your SQL Server is unusual, and is usually a bad idea. It is very close to your data, but so is a separate VM on the same VNet. It makes your SQL Server harder to manage, and there are typically much easier ways to accomplish whatever you're hoping to gain by running your code on the SQL Server,

And, moreover, if you are running your code locally on the SQL Server, there's no good reason why it has to be SQL CLR, probably. You can just run your code in a Console App and trigger it with xp_cmdshell or a SQL Agent job.

Anyway here's the powershell for registering the assemblies:

That being said, some Framework libraries are built-in and do not need to be manually added. Those are listed here:

If you need a library that is not in that list, you can add it yourself, but that doesn't mean that you can add just any library. SQL Server only allows pure MSIL libraries, not mixed mode (mixed = contains both managed and unmanaged code). If you require a library that is mixed mode, then there is nothing you can do to load that into SQL Server. ALSO, please keep in mind that even if a library is pure MSIL today, that doesn't mean that it can't be converted to mixed mode in a future Framework update (and yes, this has happened).

With all of that in mind, the following item in the error message:

probably indicates that you are trying to load a reference library. You need to load the actual library, not the reference version of it.

I tried the following on SQL Server 2017 and was able to load them all, though not all needed to be loaded explicitly. Some automatically loaded others since they were in the same folder:

Please note that, for the moment, I set the database to TRUSTWORTHY ON. This is not something that I generally recommend, and might not be necessary, but until I complete my post dealing with how to handle this properly and easily, TRUSTWORTHY will suffice.

I did not have the EntityFramework libraries to load, but the error you are getting is on the first one and the statements I posted above do not get that error. If you are able to execute those 2 statements in order to get all 5 libraries loaded, and then get an error on EntityFramework, then we will take a look at the specific error message.

HOWEVER, even if you are able to load all of these DLLs, including the two for EntityFramework, that is not a guarantee that you will actually be able to use EF. It is possible that EF is prevented from running in SQLCLR. I can't remember about EF specifically, but I do know that SMO, for example, includes code to detect if it is running within SQL Server, and if it is, then it will raise an exception stating that it is not allowed to run within SQL Server.

I solved my problem....In the stored procedure there is a ...ROLLBACK... and ...COMMIT... keywords. But there is no ...BEGIN TRANSACTION... anywhere in the procedure. From the beginning, I thought it is strange....As you know ...COMMIT... decrements ...@@TRANCOUNT... by 1. Or to be more precise:...If @@TRANCOUNT is 1, COMMIT TRANSACTION makes all d...
c# entity-framework stored-procedures transactionscope
asked by algreat

You have two classes with the same name ...Product.... Entity Framework uses ...Class Names... only, irrespective of namespaces or files where it is declared. The error message clearly says you have two Product classes, one in ...TF.MyProject.DAL... namespace and another one in ...TF.MyProject.DTO.......Try renaming on of these ...Product... classe...
asp.net-mvc c# entity-framework entity-framework-6
asked by Saagar Elias Jacky

You need to install the SQL Server Compact Toolbox on the new dev machine, it installs the DDEX provider for you. (You may have to go to the About screen in the Toolbox and clikc the DDEX install button, then restart VS)
ef-database-first entity-framework-6 git sql-server-ce-4
asked by ErikEJ

Logging the SQL generated by LINQ to SQL in Entity Framework in .net

According to ...Entity Framework Logging...:...The DbContext.Database.Log property can be set to a delegate for any method that takes a string.... Most commonly it is used with any TextWriter by setting it to the â€œWriteâ€ method of that TextWriter. All SQL generated by the current context will be logged to that writer. For example, the following...
entity-framework-6 logging sql sql-server
asked by Markus Safar

I have done the 'fromsql' off of the context directly when it is a single table, but I realize this is not what you want but it builds on it....var blogs = context.Blogs .FromSql("SELECT * FROM dbo.Blogs") .ToList(); ...However in a case like yours it is complex and a joining of multiple tables and CTEs. I would suggest you create a custom...
entity-framework-6 entity-framework-core
asked by djangojazz

The default data type for ...string... columns is ...nvarchar(MAX)..., you don't have the need to set data type in your columns for changing to ...NVARCHAR(MAX).... Ef has default conventions that Specify it. ...here... is explained for knowing conventions....if you want config generally convention for your models, you can do this:...public class D...
.net entity-framework entity-framework-6 sql sql-server
asked by Soheil Alizadeh

Yes, it is a known bug in Entity Framework 6 and below. You could not use the same databases even though they are on different namespaces. This is happening in code first design as well and a post was opened on ...GitHub... regarding the issue as well....One of the developers even answered it stating: ...This is already supported in the EF7 code b...
asp.net-mvc c# entity-framework-6
asked by Barr J

Entity Framework Core - Call A Populate Extension Method Inside Include