I'm attempting to do precisely what is said here: establishing a private threaded messaging platform a la Facebook and Gmail, but I don't really understand Joel Brown's response. Could someone kindly explain?

The example data in my database tables looks like this (I presume I entered it in properly for demonstration purposes): 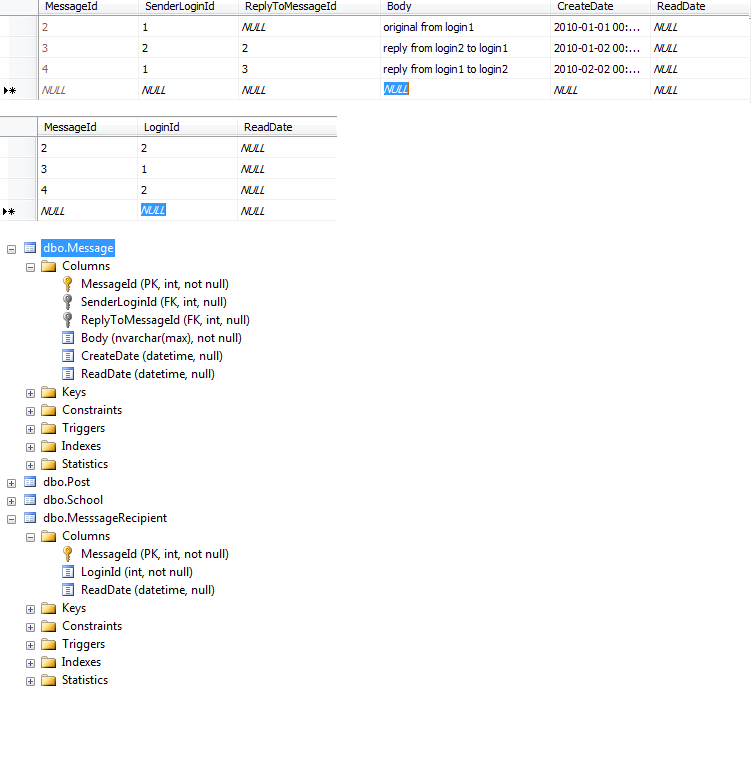 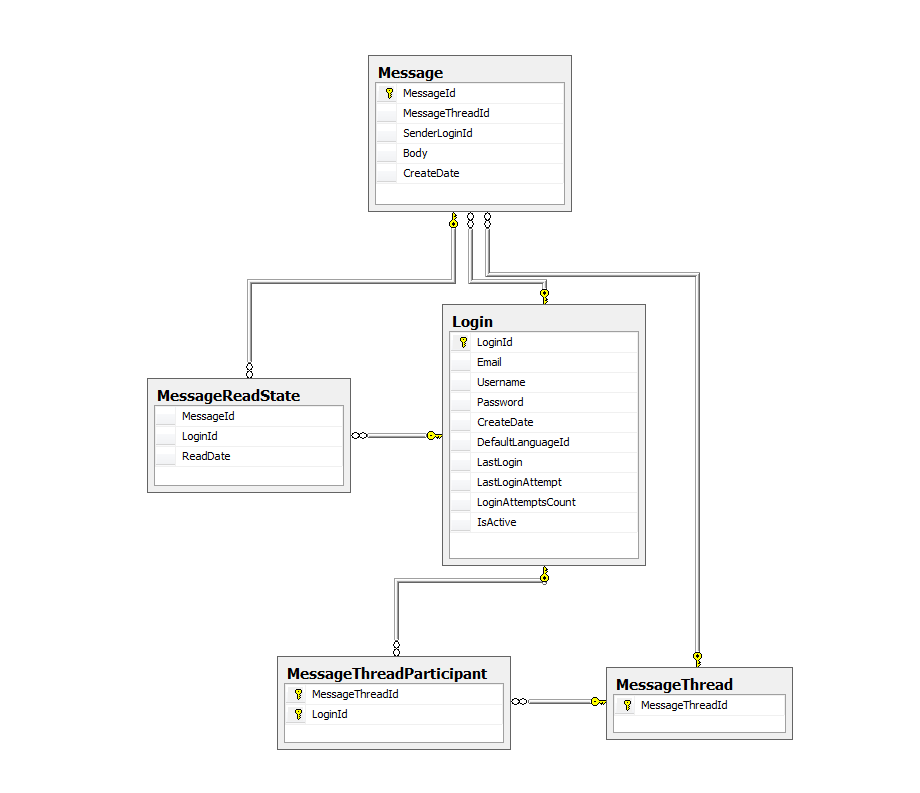 Joel, Can you clarify anything for me? (Comments and/or questions in bold)

The concept behind this is that each time a user creates a brand-new thread or message, a new entry in the THREAD database is created. The message's content is then added to MESSAGE, which refers back to the thread that contains it, and the user is added as a THREAD PARTICIPANT. The message's author is shown by the FK from MESSAGE to USER.

After that iteration, I have this:

I believe my confusion stems from the fact that Loginid 2 has no means of knowing that he has a message waiting for him. OR maybe I should add two entries to MessageThreadParticipant? Both parties can view the whole "conversation" in this fashion (the sender and the receiver)?

EDIT2: Joe, I believe I can complete this:

If I'm incorrect, do let me know:)

Why don't you simply ask, though?

Let me clarify what I think I understand about your request. I believe that you are considering a thread to be a series of messages between two persons that is linear in nature rather than a tree. You need to let in more guests than simply two, in my opinion. Insofar as anybody can write a message and everyone can read it and start contributing comments, that would be similar to Facebook. When you make a remark, you are automatically added to the discussion and begin receiving emails and status updates about thread activity. If that's what you want, then the schema I gave to Large Mike isn't precisely what you need.

Instead, think of this: 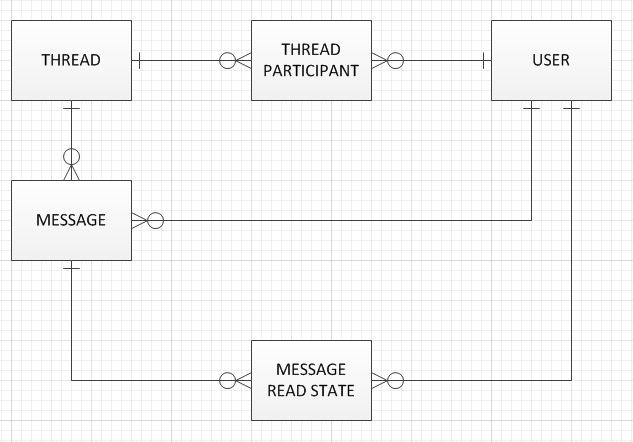 The concept behind this is that each time a user creates a brand-new thread or message, a new entry in the THREAD database is created. The message's content is then added to MESSAGE, which refers back to the thread that contains it, and the user is added as a THREAD PARTICIPANT. The message's author is shown by the FK from MESSAGE to USER.

Depending on your needs, a user who reads a message receives an item in the MESSAGE READ STATE database to indicate that they have marked the message as read, either explicitly or implicitly.

Simply pick the top message from MESSAGE ordered descending on creation date (or an identification key) where the message FK relates to the thread of interest to find the most current message in any thread.

When a message is in a thread in which the user is a THREAD PARTICIPANT, find the THREAD linked to the top 1 message that is arranged descendingly on the message's creation date.

I'm worried I'll never be able to express these ideas in LINQ without using LinqPad. I could elaborate on the response with table definitions and some SQL if you are having difficulties understanding what I'm getting at from the above. Just make a remark and ask.

EDIT: Clarification of Implementation and Requirements

To be clear, Shane wants more of the direct messaging functionality; initially, I was envisioning publicly posted messages with the option for commenting. In such situation, the THREAD PARTICIPANT table must initially include the original receiver.

Let's make a couple rows into tables to help with clarity. In honor of Canada Day, here is the scenario: User 1 DMs User 2 to inquire about meeting up for a drink. User 1 responds to User 2's enquiry concerning the meeting location. The tables would resemble the following: (probably oversimplified) 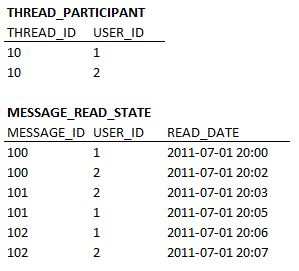 EDIT #2: Use SQL to get a list of every message in a thread, along with their read status.

This SQL will get a list of messages in a particular thread along with a notation of whether a certain user has read each message or not using @OP's schema. The most recent messages are shown first.

The read state is selected using a sub-select, which is the trick, if you can call it that. This is required because one of the requirements for obtaining the read state calls for a where clause that cannot be met by an outside join. In order to determine which (potentially missing) value you want from the MessageReadState child table, you utilize the subselect.

EDIT 3: SQL query to get all threads for a certain user that include the most recent post...

The query would be similar to the one above, but instead of filtering the messages by their FK to the thread of interest, you would filter the messages by a subquery that finds the latest message in each thread that the user of interest participated in. This would give you a list of all the threads in which a given user has participated, sorted by most recent message first, with only the most recent message being displayed (1 message per thread). It would seem as follows:

In Joel Brown's response, you may addLAST_MESSAGE_ID field into the THREAD database, it becomes quite easy to use SQL to fetch all threads with the most recent messages. This column must be updated when each message is sent.

How can I alter the Entity Framework database schema (mysql database)?

In a project, I use EntityFramework to establish a connection to a MySQL database. Devart Dot.connect is the service provider....The user must provide connection parameters during runtime for this program to connect to a database. Of course, the name of the MySQL database is included....I built and stored the custom connexion parameters using the E...
c# connection database entity-framework mysql
asked by pierre

How to check if database schema matches Entity Framework schema?

I was surprised to see that the line utilizing the ...CreateDatabaseIfNotExists... context initializer...context.Database.Initialize(true) ...When the schema does not match my code initial schema, ...doesn't... raise an error....Is it possible to verify that the current database fits our schema before, for example, trying to retrieve an object whos...
database-schema ef-code-first entity-framework initializer
asked by Eduardo Brites

I've been unable to solve this problem. I think the mistake happens when I try to populate a drop-down menu.... IEnumerable<Customer> values = db.Customers.SqlQuery("SELECT * FROM Customer").ToList().Cast<Customer>(); IEnumerable<SelectListItem> items = from value in values select new SelectListItem { Text = value.Customer...
asp.net-mvc entity-framework
asked by kayze

This operation is not supported in wcf test client because it uses system.threading.tasks.task

I'm attempting to add an asynchronous method to my WCF service, but I keep receiving the problem shown above. I just need to get a list of Categories back....Add the following to the end of the error message mentioned above for clarity: YeagerTechModel.Category[]...Except for this approach, the wcfclient service was successfully added (which has a ...
.net c# entity-framework multithreading wcf
asked by sagesky36

LINQ to Entities does not recognize the method 'System.String StringConvert(System.Nullable`1[System.Double])

Upgrade to EF6 on .net4 - System.Data.MetadataException: Schema specified is not valid

I have a.net v4-powered asp.net website. After upgrading from Entity Framework v5 to v6.02, everything ran smoothly when used locally with IIS express and.net4 and the EntityFramework v4 dll from nuget....I publish to my hosting provider and receive the following error. The solution might be to upgrade to.net4.5, however at the present, my provider...
entity-framework
asked by simon831

My web ASP.NET site integrates seamlessly with WCF services. Now, I need to call these same web services from a class Library for Telerik Reports. When I try to add a Service Reference to the web service, I keep getting the problem Could not load type 'System.Data.Entity.Design.AspNet.EntityDesignerBuildProvider'. I looked into the subject and foll...
.net asp.net c# entity-framework wcf
asked by user2471435

System.Data.Entity.Core.MetadataException: Schema specified is not valid

To my solution, I made an attempt to implement a db-Migration. But it terminated with the following error:...System.Data.Entity.Core.MetadataException: Schema specified is not valid. Errors: (0,0) : error 0040: The Type NVARCHAR2 is not qualified with a namespace or alias. Only primitive types can be used without qualification. (0,0) : error 0040...
c# devart ef-code-first entity-framework-6
asked by Hauke LÃ¼

System.Data.SQLite.SQLiteException: unable to open database file (An exception occurred while initializing the database)